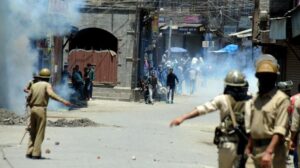 Kashmir, the picturesque Himalayan territory claimed by both India and Pakistan but divided between them, has been the subject of a long conflict between both nations for decades.

However, in the last two years, following a deadly border skirmish between Indian and Chinese forces in Kashmir’s Ladakh region, policymakers in New Delhi have been increasingly focusing on Beijing, marking a dramatic shift in approach as the country marks 75 years of independence.

Lt. Gen. D.S. Hooda, who led the Indian military’s Northern Command, which oversees Kashmir, including Ladakh, from 2014 to 2016, claimed that “New Delhi has rapidly grown Beijing-centric” as a result of Beijing’s forceful drive for dominance across Asia and the ever-expanding India’s economy, which is now considerably bigger than Pakistan’s.

Since India and Pakistan acquired independence from Britishers together Kashmir has been the focal point of two of India’s four wars with Pakistan and China. It has also experienced insurgencies, lockdowns, and political scheming. The only trilateral nuclear conflict in history occurred where the three nations’ tight borders converged in the disputed territory.

However, the present military stalemate between China and India over their disputed boundary in Ladakh has resulted in a severe escalation in hostilities between the two Asian superpowers. The tense situation has persisted through 17 rounds of diplomatic and military negotiations.

According to the former military leader Hooda, India did not perceive China as a military danger for many years. However, this calculation was altered in the middle of 2020 when a confrontation in the Galwan Valley of Ladakh, sparked military concerns.

India maintained its position that Kashmir was a matter of bilateral relations with Pakistan when addressing the international community. In Kashmir, New Delhi initially encountered a generally peaceful anti-India campaign. But in 1989, a crackdown on opposition sparked a full-fledged armed insurrection against Indian rule.

In 1998, India and Pakistan acquired nuclear weapons, turning Kashmir into a possible nuclear hotspot. The world was made aware of their impasse when then-U.S. President Bill Clinton called Kashmir “the most dangerous region in the world.”

China’s ascent to global dominance has also pushed India closer to the United States, and the Quad ( Indo-Pacific strategic alliance of the United States, India, Australia, and Japan). The Quad accuses Beijing of using economic pressure and military manoeuvre to upend regional stability.