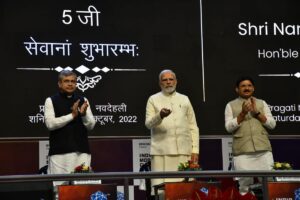 Prime Minister Narendra Modi announced on Saturday the landmark launch of 5G services at the sixth edition of the India Mobile Congress event. It is a four-day event taking place at Pragati Maidan in New Delhi. The wait for 5G in India is now over, and consumers will be able to utilize it by Diwali. Several leading firms, including Airtel, Reliance Jio, and Qualcomm, presented their 5G services and the advantages they offer.

PM Modi said, “A new India – the country is no longer just a consumer of technology but a contributor in its development too. At the time of the launch of 2G, 3G, and 4G services, India was dependent on other countries. But with 5G, the country is setting foot in a new historical era, and is leading globally.” He labeled it as “a revolution”.

He also spent considerable time at the event learning about the indigenous advancement of end-to-end 5G technology, as well as how 5G may overcome the divide between urban and rural healthcare services. Additionally, the latest 5G network will not only provide customers with increased internet speeds, but will also assist the government in areas like disaster management, agriculture, and reducing the contribution of individuals in risky industrial operations like deep mines and offshore operations.

Reliance Industries’ Chairman, Mukesh Ambani stated during the event that 5G is much more than the next technological generation. It will truly open the possibilities of other technologies such as AI, the Internet of Things, robotics, blockchain, and the Metaverse.

He further stated that Jio will make every effort to provide “the highest quality and most affordable rates that anyone else has in the world.” The telecom company intends to bring 5G to every region of India by December 2023. Airtel has stated that it would begin rolling out 5G in eight locations today. While the identities of all the locations are unknown, the company has confirmed that 5G would be available in Mumbai, Delhi, Varanasi, and Bangalore today. However, this does not imply that all residents of these cities will have access to 5G in every neighborhood. This will most likely require some time, but customers in certain areas will be able to access the 5G network. Vodafone Idea will also commence a 5G rollout in the coming months.

The four pillars that have been under-emphasis to assist India to become digital are the price of the gadget, digital connection, data cost, and the concept of ‘digital first.

5G will first be available in certain urban areas, with users experiencing 10 times the internet speed of 4G. It will ensure a maximum data transfer rate of up to 20Gbps per second, which is more than 100Mbps per second. Presently, we can achieve up to 1Gbps with 4G. The government has previously announced that consumers in India would not have to spend a lot for 5G services, which will be provided at low pricing.

It’s important to highlight that Indira Gandhi International Airport in Delhi is now 5G-ready. As a result, passengers will shortly be able to enjoy improved airport speeds. Prices for 5G plans are scheduled to be revealed in the coming weeks by Airtel, Jio, and Vodafone Idea.