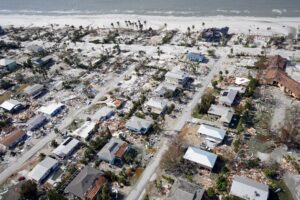 Ian one of the most deadliest hurricanes ever to hit the United States after walloping Florida, surged into South Carolina on Friday, landing a devastating second blow.

As a Category 1 hurricane with top sustained winds of 140 kilometers per hour, Ian made landfall close to Georgetown, South Carolina, according to the National Hurricane Center (NHC).

Ian is a root cause for torrential rain, flash flooding, and high winds to both South Carolina and North Carolina, according to the NHC. It was later reduced to a post-tropical cyclone. Rainfall of up to eight inches is possible in certain locations.

23 people have died as a result of the hurricane, according to the Florida Department of Law Enforcement on Friday night. Even higher death tolls have been reported by media sources citing county officials, with CNN reporting that Ian is to blame for 45 deaths.

According to the Coast Guard, 17 migrants are still missing from a boat that capsized on Wednesday during the hurricane. Nine people were saved, including four Cubans who swam to shore in the Florida Keys, and one person was discovered dead.

It will “take months, years to recover,” according to President Biden, with damage estimates reaching the tens of billions of dollars.

Rescue teams were helping survivors on Friday in the ravaged areas of Florida, and the US Coast Guard reported that it has carried out 117 rescues of persons stranded in flooded homes using boats and helicopters. Hundreds of additional rescue workers are going door-to-door “up and down the coastline,” according to Governor Ron DeSantis.

DeSantis referred to the coastal community of Fort Myers as “ground zero” for the hurricane, but said:”This was such a massive storm that there are consequences far inland,” including significant flooding in Orlando.

Prior to the storm, many Floridians left their homes, while thousands opted to stay put and weather the storm.