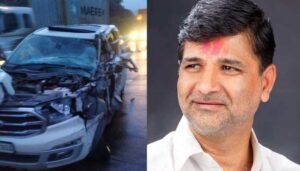 Shiv Sangram’s chief Vinayak Mete succumbed to his injuries at MGM hospital, Kamothe, on Sunday, after his car met with an accident, on the Mumbai-Pune Expressway. His driver Kadam, and bodyguard constable Dhobale have sustained severe injuries.

The trio was en route to Mumbai while the mishap took place. PSI Ganesh Burukul from the traffic police squad affirmed that Mete’s car had crashed into an unidentified vehicle around 5:30 am while overtaking near Panvel, Raigad. All the three men were rushed for aid in an ambulance immediately. However, around 7:00 am the former member of the Legislative Council passed away.

Mete is survived by his wife and two children.

CM Eknath Shinde and Deputy CM Devendra Fadnavis visited the hospital shortly after Mete’s demise. CM Shinde expressed his grief on Twitter, “The accidental death of Vinayak Mete, founder of Shiv Sangram Party, President, and ex-MLA, who always insisted on the issues of Maratha community including Maratha reservation, is heart-wrenching. May his soul rest in peace and may his family find the strength to recover from their suffering.”

Highlighting the late leader’s demands to reserve seats in education and jobs for Marathas, Nationalist Congress Party (NCP) President Sharad Pawar said, “He was more of a social activist than a political leader.”  State Minister, Chandrakanth Patil also added that Mete’s demise has left a huge void in Maharashtra’s politics.

Congress leader Ashok Chavan also told PTI that Mete’s death was unfortunate. Chavan further added that they were always on the same page over the issues regarding the Maratha reservation despite being in different political parties.

This is the second accident over the last three weeks on the Mumbai-Pune Expressway near Panvel. In the last week of July, an ST bus rammed into a stationary vehicle, where one passed away while 18 others suffered serious injuries.