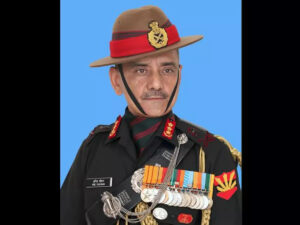 On Wednesday, September 28, Lt. Gen. Anil Chauhan (retired), the current military advisor to the National Security Council Secretariat, was named as the new Chief of Defence Staff (CDS). Before that, he oversaw military operations as the Director General for the 2019 airstrike on Balakot.

The decision from the Government came nine months after the tragic death of Gen. Bipin Rawat in a helicopter crash in Tamil Nadu.

A retired three-star officer serving in a four-star rank would be taking up this role for the first time in the history of the Indian Army.

According to a statement from the defence ministry, “The Government has decided to designate Lt General Anil Chauhan (Retired) as the next Chief of Defence Staff who shall also function as Secretary to Government of India, Department of Military Affairs with effect from the date of his assumption of charge and until further orders.”

Lt. Gen. Chauhan, an Indian Army officer, was born on May 18, 1961, and enlisted in the 11 Gorkha Rifles in 1981. His educational background includes the Indian Military Academy in Dehradun and the National Defense Academy in Khadakwasla.

Known as the “China expert,” Lt. Gen. Chauhan served in the Eastern Command for several terms before retiring on May 31, 2021, as the commander of the Eastern Army.

The general, whose career spans almost 40 years, served as the Director General of Military Operations (DGMO) during the airstrike on Balakot in 2019 and an operation that attacked numerous insurgent factions in the Northeast in that same year before taking over the Eastern Command.

Following his retirement the previous year, he was chosen to serve as the NSCS’s military advisor under National Security Advisor Ajit Doval. Lt Gen Chauhan, who will serve as the CDS, would oversee India’s theaterization efforts while the three Services work out their disputes about the precise structure and leadership.

Lt. Gen. Chauhan has held a number of command, staff, and key positions throughout his active career and has a wealth of knowledge on counter-insurgency operations in J&K and Northeast India.

His nomination as the CDS was made possible by the formal amendments to the rules and regulations that the government adopted in June of this year, which allowed even retired three-star officers to be eligible for the top position.

In the crucial Baramulla area of the Northern Command, the officer, a Major General back then, had been in charge of an Infantry Division. He later oversaw the 3 Corps in the Northeast as a Lt. Gen. He then assumed the position of General Officer Commanding-in-Chief of the Eastern Command in September 2019 and retained it until his retirement from active duty last year. His participation in the UN mission to Angola was equally noteworthy.