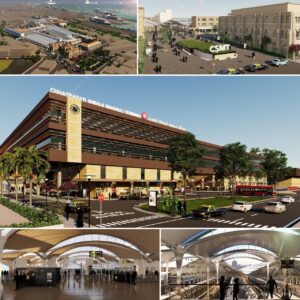 The redevelopment of the three stations is a part of a bigger project that aims at changing the look and facilities of 199 stations all over India. While tenders have been issued for 47 stations, the work is underway at 32 stations.

CSMT of Mumbai is a part of the UNESCO World Heritage monument. Vaishnaw said that the CSMT’s heritage building won’t go under any changes and only the areas surrounding it will be redeveloped.

A proposal of Rs. 10,000 crore for redevelopment of the three major stations was approved today. The total cost to be incurred for the entire operation is around Rs.60,000 crores.

The Ministry of Railways shared a walkthrough of the graphical representation of the future redeveloped CSMT station.

Home Minister Amit Shah also tweeted the pictures of the redevelopment plan approved by the Cabinet.

According to the government, the plan will generate a total employment for 35,744 people and help in the advancement of the local economy through investments. The initial design of the development plan includes spacious roof plaza with all passenger amenities in one place. It will also include retail, cafeterias, recreational facilities, Divyang friendly facilities, etc.

The railway minister elaborated: “It will take approximately two to two and a half years for the completion of these three railway stations. Modular technology will be used throughout the process of redevelopment.”