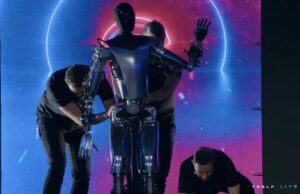 Tesla CEO Elon Musk presented the latest prototype of a humanoid robot on Friday at Tesla’s office in Palo Alto during the Automotive company’s AI Day event. Named ‘Optimus’, the robot shares some AI software and sensors with Tesla cars’ Autopilot driver assistance features. The software was redesigned to be compatible with a new body and environment. The prototype on display was put on a stand and rolled on and off stage by Tesla workers. While on stage, Optimus waved to the audience, while Musk mentioned how he “wasn’t quite ready to walk”.

Other automakers that have also developed humanoid robots include Toyota Motor and Honda Motor. However, Tesla’s approach to Artificial Intelligence and humanoids is different in that Optimus is planned for mass production with millions of units to be sold at a price “probably less than $20,000” (a little over 16 Lakh Rupees).

Tesla claims that the Optimus model would be a relatively more capable robot and the company would be ready to take orders for the robot in three to five years. In the concluding Q&A session, Musk mentioned that he is banking on Tesla’s experience manufacturing drive units for electric cars to build AI and necessary actuators for robotics. The prototypes will be tested by working jobs in Tesla’s factories. At the event, the company also filmed a prototype clip performing different tasks like lifting metal bars, watering plants, and carrying boxes.

With Tesla’s history of several missed ideas, whether or not a production-ready Tesla Bot will actually hit the markets could be anybody’s guess. However, the company is determined to powerfully move forward in the robotics direction with Musk calling the robot “the most important product development we’re doing this year” and predicting that it will have the potential to be “more significant than the vehicle business over time.”