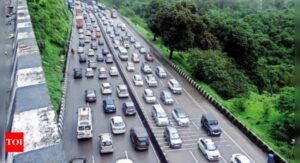 On Saturday morning, an unusually large rush of commuters from Mumbai to tourist destinations like Lonavala-Khandala, Pune, and further like Mahabaleshwar and Goa caused confusion and interruption of traffic movement along the Pune-Mumbai Expressway.

The extended weekend contributed significantly to the rush. On Saturday, it took eight hours to travel 148 kilometers via highway from Mumbai to Pune. The normal travel time is three and a half hours.
“We departed at 7.30 a.m. and arrived at the Khalapur toll plaza around 9.45 a.m.” However, it took us another three hours to get to Lonavala. It was total mayhem, and my car was going at a crawl. “We’ll remain at Lonavala for two days,” Thane resident Aniruddha Choudhari told TOI.

The situation was particularly hazardous between Khalapur and Lonavala. Long lines of four-wheelers, light industrial, and heavy autos were spotted in a number of roads, moving slowly from Mumbai to Pune. The same is true for vehicles traveling to Mumbai on the section between Lonavala and Khandala.

“The Pune sector of the highway remained jammed in the early hours, while the Mumbai corridor was moving at a moderate speed,” said Inspector Sitaram Dubal of the Lonavla (City) police. Later in the afternoon, as the cars arrived at their destinations in and around Lonavala-Khandala, the situation improved. We were in charge of traffic on the freeway as well as the old Pune-Mumbai route.”

“The internal routes, too, remained clogged till the afternoon, as vehicles from Pune and Mumbai arrived at the hill station,” he said. The route to Bhushi Dam and Amby Valley remained congested till late afternoon. “We cleared the traffic in the evening,” he said.

“We had expected the influx due to the holiday weekend,” said a motorway security patrol officer. Police officers had been on the route since early in the morning, but the volume of traffic created bottlenecks at the expressway’s access and departure points. In the afternoon, the number of automobiles dropped dramatically.”