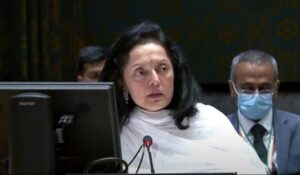 India along with China, Brazil, and Gabon abstained from voting on a draft UN Security Council resolution that condemns Russia’s ‘illegal referenda’ and annexation of four Ukraine territories between 23rd to 27th September. It urged other nations not to recognize the purported annexation of territory by Moscow. The resolution failed to get adopted as Russia vetoed and four nations abstained.

Ruchira Kamboj, UN Ambassador said that the nation is deeply disturbed by the recent turn in the Russia-Ukraine war. It called for an immediate cessation of violence and emphasized a return to the negotiating table. At human cost, no one can arrive at a solution. Dialogue is the only way to settle differences and disputes.

Linda Thomas-Greenfield, US Ambassador urged the world to show that they are still on sovereignty and protecting the territorial integrity side.

The UN security council meeting happened after Putin announced the Russian annexation of four Ukraine regions which are Donetsk, Luhansk, Kherson, and Zaporizhia at the Kremil signing ceremony. Putin slams West as neo-colonial ‘Satanic.’ This announcement came after Antonio Guterres, UN Secretary-General said it would be a violation of the Principles of the UN Charter and international law if any annexation of a State’s territory by another State resulted from the threat or use of force.

Due to the annexation announcement, Zelensky announced fast-track membership of  NATO. He accused Russia of using murder, blackmail, mistreatment, and lies in redrawing borders and it’s a dangerous escalation.

With Ukraine, the west rejected the 15% rule of Russia in Ukraine and called it illegal. The US, Britain, and Canada imposed new sanctions on Russia. President Joe Biden said: “Putin is struggling and assured Ukraine full support.”