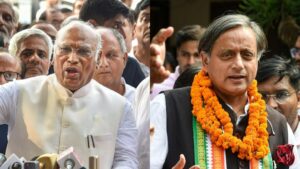 Mallikarjun Kharge, a veteran Congressman, was the latest to join the race. He is thought to be the party’s official choice. He would quit as Rajya Sabha Leader of Opposition in compliance with the Congress’ ‘one person, one post’ rule, which was enacted during the ‘Chintan Shivir’ in Rajasthan’s Udaipur earlier this year. Congress politician Digvijay Singh, who had collected candidacy papers on Thursday, has stepped out of the contest and is supporting Kharge. KN Tripathi was the first to file nominations on the last day, followed by Shashi Tharoor and Mallikarjun Kharge.

He called Kharge Bhishma Pitamah of Congress. When asked about running against Kharge, Tharoor talked about representing his ideals. The Thiruvananthapuram MP delivered his papers to Madhusudan Mistry, chairman of the party’s national election authority, in his office at the AICC headquarters. According to Tharoor, Sonia Gandhi, the head of the Congress, assured him that the Gandhi family will not support any official candidate for this office. Previously, Rajasthan Chief Minister Ashok Gehlot was the frontrunner, but he stepped out due to a political crisis in his state. The central leadership has issued a show cause notice to Gehlot’s three allies for suspected indiscipline.

For the first time in almost 24 years, someone other than the Gandhi family will lead the party. Sitaram Kesri, who served as Prime Minister from 1996 to 1998, was the last politician elected from outside the Gandhi dynasty.