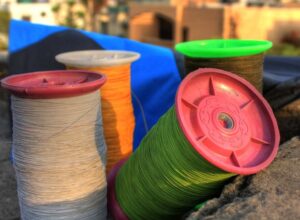 As India prepares to commemorate the 75th anniversary of its independence, kite markets in Delhi are back in business. But this year, as the trail of deaths begins yet again, the police and NGOs are on the lookout to stop the sale of the infamous “Chinese manjha,” which has hurt many people or taken the lives of many.

Every year as the independence day progresses, colourful kites of all sizes, including extravagant ones, slowly start filling the skies. However, occasionally this relatively safe traditional sport results in street bloodshed due to the Chinese Manjha, commonly known as glass-coated thread, the selling or possession of which is prohibited in Delhi.

Trails of this year

The trail of deaths for this year began three weeks back, when a 30-year-old biker died on the spot in Northwest Delhi as his throat got slit by a Chinese kite string on the Haiderpur flyover. The man was rushed to a hospital, but he couldn’t be saved.

In August, two people survived the manjha attack by a sharp edge as they got medical attention at the right time. One of them was Vidyawati, a 61-year-old whose neck was slashed again by a manjha and looked like a knife inflicted the wound. Vidyawati was riding a two-wheeler in the East Delhi neighbourhood when she met with this accident. Like Vidyawati, Usha Ranjan, 54, also had a similar accident. The manjha strangled Usha’s right leg while trying to cross the street, tying her muscles from the thigh to the ankle bone.

Both the patients were immediately rushed to Max Hospital in Patparganj and had to undergo immediate surgeries to save their lives.

Recently, a terrible occurrence on Rakshbandhan resulted in the death of a biker whose throat was slashed by a Chinese manjha when he was travelling to his sister’s house for Rakhi.

The Delhi govt. over the years, has passed several laws and has taken several measures to prevent such occurrences. The Supreme Court issued a blanket prohibition on manjha made of nylon or other synthetic fibres in 2017. But still, the issue keeps on arising every year.

To “completely restrict” kite flying and associated activities, including the alleged usage of “Chinese manjha” (kite string), a Public Interest Litigation (PIL) was filed in the Delhi High Court on August 3, 2022. The PIL cited safety issues as justification.

Unfortunately, this plea was rejected by the Delhi High Court bench, consisting of Chief Justice Satish Chandra Sharma and Justice Subramonium Prasad, on August 5, under the umbrella of kite flying being a cultural activity and having religious connotations. But the bench ordered the city authorities that the ban and sale of Chinese manjha is aptly followed.